Aaron Meli of Slappingskins at work

The musical paradise that is Brazil

I've been back in the UK for around a week after a 5 week trip to Brazil where I was learning some basic pandeiro skills and soaking up lots of rhythms before, during and after carnival...the biggest party on earth.

I arrived in Rio on the 24th January to meet fellow percussionist Jackson Lapes who had been out there for the previous 4 months. His welcome to Rio included an essential shopping trip to Rua da Carioca where he guided me through the lovely pandeiros (tambourine) on offer. My new pandeiro would travel with me almost everywhere over the next 5 weeks or so. 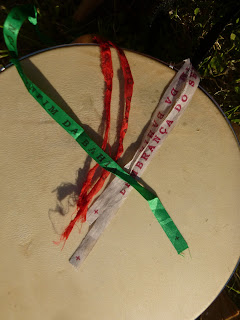 The basics of playing the pandeiro are not so easy to grasp as I would discover over the initial few weeks of practice. I would play at bus stops, on buses, waiting for meals, on the beach and other beautiful stops and locations on my trip. I was frequently given impromptu lessons by passing Brazilians who pitied my poor technique or would show me some new trick that was always much harder to master than it looked.

I made several videos of these 'lessons' and will shortly add them to my youtube channel: http://www.youtube.com/user/MrSlappingskins/videos?view=0

The first week in Rio reminded me of my last trip to Rio in 2002 on Peaceboat
(http://www.peaceboat.org/english/?menu=82) where I had an opportunity to soak up some samba firsthand but missed carnival by one day! This time I would experience the whole of carnival...but not in Rio but several hundred miles to the North of Brazil in Salvador do Bahia where myself and Jackson were headed.

Rio was buzzing with excitement and the preparations for carnival were in full flow as marching bands, blockos and samba schools busily rehearsed for their performance slots. I was amazed to see how the pandeiro was being used in performances all over the city including a local samba school  evening rehearsal in the sambadrome itself.

The last day in Rio saw a scheduled meet with a pandeiro 'superhero' from Italy who was to give Jackson and myself a masterclass in playing on the beach at Copacababa. (see youtube video).

Armed with plenty of drills to practice we left Rio and flew to Salvador for the month of February. Our first day saw us attend a huge open air show of Ile Aye, one of Brazils most famous samba reggae groups. 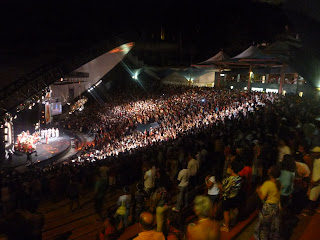 Bristol-based Jon Hardeman who classes Salvador as his spiritual home accompanied us to the open air show along with other friends and fans of the well known group.  The crowd was in great spirits as guest after guest appeared on stage alongside Ile Aye. The show finished with the 'Brazilian Shirley Bassey' making an appearance to the delight of the excited crowd. It was a powerful welcome to the state of Bahia.

A day later Jon, Jackson and myself were up at 5am to honour Yemanjá, the Goddess of water. Thousands of people turned up to attend the ceremony making offerings and throwing flowers into the sea. Music was everywhere and people old and young came together to celebrate.

Carnival preparations were all underway and as day one of six neared, the marching bands/blockos and samba groups could be seen out in the streets building up the momentum of carnival 2013. The six days of carnival were an intense experience as two million people flocked to the streets. The old cobblestoned streets in Pelerinho saw the majority of the blockos whilst the huge artic truck soundsystems crawled around the wider and more modern streeets of Salvador.

Before carnival I was told, by a seasoned veteran, that I should be ready to be 'digested' by the crowds during carnival. I did not understand at the time but over the six days I understood his meaning and was, by the final night, quite relieved to have survived the experience.

A more musical location I would be hard pressed to find outside of Cuba and West Africa. Everyday of the week something magical and inspirational was going on. None more so than on a Saturday where the local modern art museum transformed their outdoorspace into a jazz venue attracting some of the best musicians in the city. 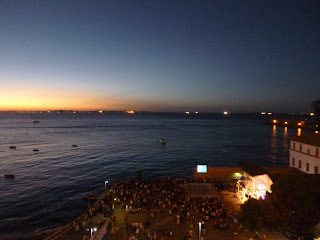 My time in Salvador was truly inspirational and I cannot recommend it enough as a destination. I stayed at the centro cultural fusion which was a perfect base for my time there. The centro hosted many a workshop and performance and was used by many visiting and local musicians. Get in touch if you're considering a trip there for the contact details.

In the meantime it's back to Wales for more percussion and to try and bring together some new influences into my work Slappingskins. Drum on!

The london jazz festival has only just begun But the event has dished out an amazing array of talent and entertainment on its first weekend. Hyperpotamus put on an awe inspiring show up at the arts depot. He wowed the audience with his captivating rhythms, melodies and unique dance moves in a thoroughly inspiring set. He finished off an incredible set with a cover of sweet dreams where he had the audience joining in this anthemic tune.

The barbican hosted SCENE FINLAND. I managed to catch 3 of the 4 acts: RAKKA + KUARA + ANNA-MARI KÄHÄRÄN ORKESTERI. The bands were incredible and each drummer left me feeling completely awestruck as each one had their own unique style and sound which was such a joy to behold. The final act of Anna-Mari and her accompanying band were so enthrawling on their first outing to London that I can hardly believe that they are not regulars on the scene. The drummer played most of the set with a stripped down kit with one crash cymbal, snare, floor Tom and kick drum. He played most of the set with his fingers tapping and manipulating the skins on the snare and floor Tom reminding me of the old footage of John Bonham slappingskins on his kit. I was utterly inspired to watch him produce such wonderous sounds on his set up and can't wait to sit back in the studio and try out some new tips!

September saw slappingskins run a team building afternoon with Boots up near its uk HQ. in Nottingham. 350 delegates took part in my biggest ever drum circle. It was a real joy to work with such a big group of drummers and I'm happy to say that everyone took part in the beat as the whole event went off with a bang! A big thank you to Boots for the opportunity of working with such a fun team. I look forward to my next big event! Aaron.
Posted by Aaron at 23:13 No comments: